Whether you are going through a divorce or simply establishing legal rights over shared children, a child custody dispute can be stressful and challenging. In general, you are probably seeking to protect your relationship with your child while achieving an arrangement that is in his or her best interest. Unfortunately, parents can often disagree about what is in a child’s best interest, and there may be complicating factors involved, such as financial issues, geographical distance, or educational needs. Even if you have an amicable relationship with your child’s other parent, there are still complex issues that can arise. Although you may be tempted to navigate the child custody (conservatorship) process without an attorney, this can have adverse consequences for the ultimate, legally binding agreement that is reached. At the Goodman Law Firm, our Rockwall child custody lawyer provides each client with knowledgeable legal counsel and vigorous advocacy. We know that you have pressing questions and concerns, and we are here to help you fight for a favorable outcome in your case. Michael E. Goodman has over 17 years of experience, during which he has handled over 300 trials.

In Texas, a child custody arrangement is technically called a conservatorship. If the parties are divorcing, the issue of child custody will be addressed during the divorce. If the parents are not married and wish to establish a court-approved parenting plan, either or both of them can file a Suit Affecting Parent-Child Relationship. This process is similar to filing a civil lawsuit, and a child custody attorney in Rockwall can make sure that you follow the appropriate procedures.

If the parties are undergoing a divorce, the court will make an initial determination regarding which parent has primary custody of the children during the pendency of the divorce. However, the arrangement may change in the final divorce decree. It can also be modified after a divorce based on a substantial change in circumstances. Finally, it is important to note that Texas has adopted the Uniform Child Custody Act, which is intended to streamline and unify child custody laws across the U.S. 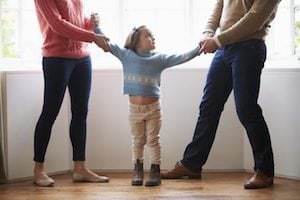 Parents in Texas can agree on an arrangement that suits them and file a proposed custody or visitation schedule, which is known as a parenting plan. The court must review and approve this parenting plan before it is finalized. If the parents are not able to agree on a custody and visitation schedule, the court will make a decision for them. There are several factors that the court must consider. They primarily focus on determining a plan that is in the child’s best interest. Texas law also requires the court to consider the child’s preferences when creating a parenting plan for the family.

At the Goodman Law Firm, we have seen how difficult and hard-fought a custody dispute can be. Our first priority is ensuring that your voice is heard and that your position is articulated with the vigor and tenacity that you deserve. We can thoroughly investigate your case and determine a strategic course of action to pursue your goals. To schedule a free consultation, call us at 972-772-4140 or contact us online. We represent people going through child custody, child support, or other family law disputes throughout Rockwall, Kaufman, Hunts, Dallas, and Collin Counties.